I have kindly been given permission to mention a Swedish knife company that until recently, I worked for.

Casström is a family-owned business with it's office in Swedish Lapland. The company manufactures a growing range of knives and outdoor equipment, working with some well known figures in the bushcraft and survival communities. Casström have designed knives in collaboration with Alan Wood, Roger Harrington and Lars Fält, who are all men of no small reputation in their respective fields! The english website link is below:-
http://www.casstrom.co.uk/epages/Casstrom-Outdoor.sf/en_GB/?ObjectPath=/Shops/Casstrom-Outdoor/Categories

Casström have recently begun supplying a range of knives to the Knife Shop Australia, in Brisbane, Queensland. Hopefully there will be a few Casström knives at the Sydney Knife Show, so you guys can take a look at them there and see what you think.
https://www.knifeshopaustralia.com.au/tactical-survival-knives/survival-knives/?rf=va&va=2657

In my opinion (and I can now say this as a bloke who just owns a couple of Casström knives with no vested interest) Casström are hard to beat when you look at the quality of the knife for the price. I own both the Lars Fält knife and the Roger Harrington Woodsman, and both are great bushcraft knives that hold an edge. I have seen first hand the commitment to quality and honestly, the fit and finish of Casström knives reflect this.

So if any of you are going to the Sydney Knife show - take a look at the Casström knives on the Knife Shop Australia stand. I reckon you will be pleasantly surprised.

Right, I'm off out fishing. It's a nice, sunny day here in Lapland and with six months of snow on it's way starting in November, you take the rays when you can!

I'm a big fan, Dingo, both for the quality of the gear and the way the firm does business.

I fired them off an email about their sling after you posted, very rapid and helpful response.
L

Good to hear, Thrud! The boss instills the right customer service ethic, for sure. A nice bunch of folks who work there.
L

I will shortly be getting a shipment of our knives together for Knife Shop Australia. Mark there is a sound guy, and I'm happy to be dealing with him in trying to get the Casström name a little better known Down Under. We've got a good range of knives, with more to come in the future. Have a look at the Casström knives on the Knife Shop Australia website, or our own website at www.casstrom.co.uk

If anyone has any questions, you can always drop me an email and I will be happy to assist in any way that I can.

Just as an update, when I first posted here, I had left Casström for a six month sabatical. I've been back with the firm since just before Christmas.

That Lars Falt is a beauty.
O

wow these are some beautiful knives!

I regularly use the Lars Fält knife and the Woodsman. Both knives are versatile and comfortable to hold. The curly birch is lovely, but I am personally a fan of the Bog Oak. It's cool to think that I'm holding something thousands of years old! The Bog Oak we use is taken up from the fens of Lincolnshire in England, and is usually between 4-6,000 years old.
B

I've wanted to get the woodsman with the bog oak handle , but I need to justify and use it . The Helle Alden is my belt knife and really don't want it to be relegated to the knife locker . Not a bad problem to have though . 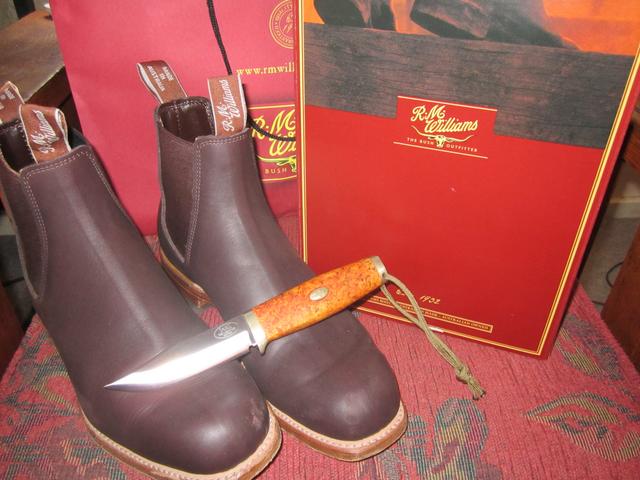 Well folks, I will mention to the boss that people seem to want a Bog Oak version of the Lars Fält Knife!

Hello folks!
Just thought I'd give you a heads up on our latest knife.

In response to many enquiries, we have developed and produced our first folding knife, and once again we worked closely with Lars Fält on the design of this piece. Lars, as I'm sure you are aware, is a renowned Swedish survival expert and outdoorsman. And an all round good bloke to boot!

The sturdy 7.5cm long, c.3mm thick blade in Böhler N690 stainless steel (hardness 59 HRC) will accomplish most tasks, being especially useful around camp. The Lars Fält Lock Back will provide a competent and reliable knife when out in the field. The full scandi grind gives versatility and is easily maintained, while the handle of carefully selected curly birch gives the knife a traditional Scandinavian look and feel.

Casström have been working closely with Lars Fält on getting his series of books translated into English, where a wider audience can benefit from Lars’ knowledge of the outdoors.
I’m very pleased to announce that his first English language book – Outdoors the Scandinavian Way – will be released in the Spring of 2020, and will be distributed by Casström.
As a bit of background, Lars Fält is internationally recognised as one of the foremost experts in wilderness and survival skills. He founded the Swedish Armed Forces Survival School, and over a long career has worked extensively with special forces and indigenous peoples across the globe. With the ending of his military career, Lars concentrated his efforts on educating the public through a series of books written in his native language, Swedish.
Whilst the content is admittedly more specific to the boreal forest of the northern hemisphere, it is a delightful book with some cracking illustrations by Alf Lannerbäck. I have attached a few sample pages from the Swedish version.
Cheers, folks!