Despite hard use, from tropical rainforest to desert country and everything in between, my old ultralite backpacker model Hennessy hammock has served me well, but I don't know how many trips it has left in it. I started researching replacements the other week and I am starting to get confused at all the options when looking at new camping hammocks.

At some stage I'll have to bite the bullet and pick up a hammock as good, if not better than the Hennessy it's replacing, but in the meantime I've decided to simplify the whole thing and grab a basic "parachute" hammock. Similar to this one: 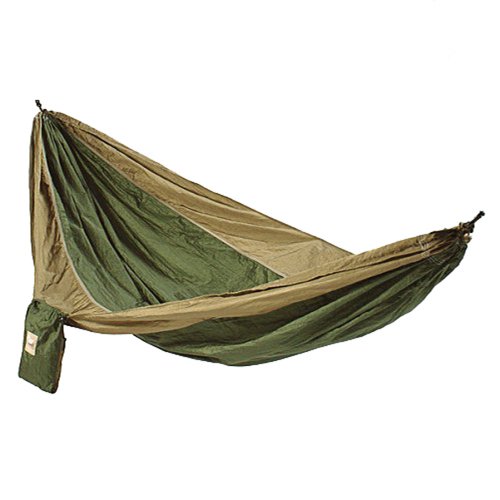 Last weekend I played with one of these parachute hammocks (Coleman branded one from BCF) which had been modified with a-sym side tieouts constructed from shockcord and I was impressed. Today I ordered a cheapie off That Auction Site for about $20 to test the concept myself.

This "generic" hammock is very similar to one of the Hammock Bliss more basic models and is made in a colour called "camel" which is a cross between coyote tan and olive drab. 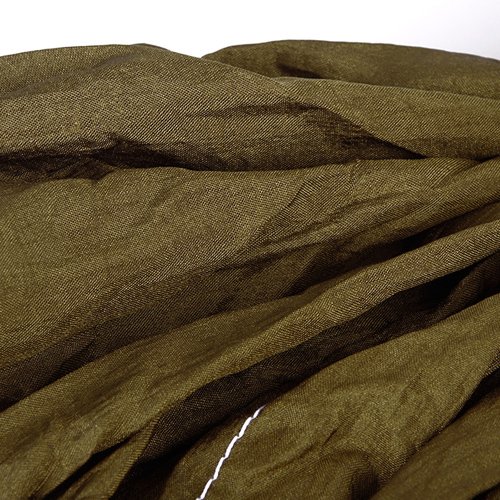 Do people add a ridgeline to "parachute" hammocks? I can see how that would be necessary for rigging a mozzie net, but would you need one to rig a tarp?

I don't use a parachute hammock but I find having a ridge line is great for hanging shoes and other items away from water or insects...

You could get a tarp up without one but I'd rather have it there if there's any chance of rain to add extra support...

pap11y said:
I don't use a parachute hammock but I find having a ridge line is great for hanging shoes and other items away from water or insects...

You could get a tarp up without one but I'd rather have it there if there's any chance of rain to add extra support...
Click to expand...

Yeah, I find the ridgeline on the Hennessy very convenient for hanging boots out through the bottom opening like so...

...and the little mesh pocket is used every time I use the hammock. In fact, I'd be lost without it.

I'll test out the parachute hammock with and without a ridgeline and see which config I like best. There's also the possibility of rigging a standalone line over the top of the hammock and under the tarp. I'll see how it goes.

What about mozzie netting? I think Ray Mears used standalone netting in one of his jungle episodes. Might track that down and see how he did it.

This is the mozzie net I like - Fronkey net

I prefer a ridgeline on my hammocks as well, whether I am using a net or not.

You can add a ridge line to the hammock to lock in the distance between the ends of the hammock which effects the lay.

I received the parachute hammock today and I'll be nutting out the best configurations for it when I use it on a walk on the weekend.

Initial impressions are good. It's plenty big enough and even the fat polypropylene ropes it comes with seem suitable for the task at hand. I will be doing one simple mod to this hammock in anticipation of the weekend's walk, and that's add some side tie-outs made out of 3mm coyote brown shock cord. If it survives the weekend, I'll look at replacing the suspension system and adding an integrated ridgeline.

The configuration I'll be testing on the weekend will be:

This hammock, modded with shock cord tie-outs
A separate line tied above the hammock to serve as a quasi-ridgeline
An army issue mosquito net tied to and hung off the "ridgeline"
Hennessy Hammock silnylon tarp pitched as shelter.

I have one of those (first pic) but only use it for lazing around on a day hike - the stitching just didn't seem bulletproof enough to trust as a sleep option like a hennessy. First thing I did was change out the supplied rope tie-outs with decent rope, seems to look like what you've done too. I would definitely have a ridgeline of some sort, for all of the reasons above.

That being said, that hammock, with a really swish silnylon tarp would probably take up way less room than a hennessy. I have put my hennessy in a compression stuff sack and the tarp in its own drybag and it still isn't as small as i'd like.

I never liked the "giving birth" version of the hennessy because I don't run an underquilt yet and to get on my fancy down mattress is way easier with a side zip.

I'd like to see just how small you can get your whole setup (hammock, tarp, mozzie net) if you get the chance. Weight would be good too!

Here's some comparison pics between the two systems -

Hi JIN. As an owner of both HH deluxe expedition and para hammocks from ticket to the moon and Outdoor gear Malaysia and then various other makers I can say that you get what you pay for and make the most of what you have got.
Now as you know you can’t go wrong with the Hennessy. I have used the para hammocks (PH) for overnight trips and put a paracord ridgeline between the hooks that was adjustable with a tension knot. This way you are able to get the right "sag" in your PH to be able to get the best sleep. If you get the PH's that are made for two people called the double then it will be as big as the big HH's so you can sleep at the diagonal to lay flat. the ridge line does aid in the hanging of a mozzie net but is not necessary as you can just string up the net separate.
The thing is that once you add all the extras be it ridge line, mozzie net, tarp and under quilts or mats etc. then the weight difference is not much from a system like HH, Warbonnet, ENO etc. Plus the price is not much different so in the end it is what you want and how much hassle you want when setting up your system.
Hope that helps.

Hey mate, I know you have already seen this on the Hammock Hangers FB page but for others it may be useful. If you mod the net with a linelok tensioner there is no need for a ridgeline on your hammock to hold the net up. This is a design I am currently working on.

Thanks Swampy. The parachute hammock was advertised as a double, and it seems to be as roomy as the Hennessy. The only real attraction for the cheapie parachute hammock at this stage is as a budget option while I decide on a new "proper" hammock, keeping in mind my Hennessy is still perfectly serviceable for the time being. Since I've got separate mozzie nets and hutchie/tarps, I thought it'd be fun to play around with the setup. I have a spare Hennessy ridge line in the spares box, among other things, so I will take the advice given and add a permanent ridgeline to the parachute hammock and experiment and adjust to find a consistent lay.

Simon, that's a great idea and you've inspired me to do something similar with the army issue mozzie net, which has cords sewn in the top corners, perfect for tying off to the main suspension (the net is a box configuration when set up on the ground). It is also hemmed at the base, so I'll add a shock cord drawstring as per the Fronkey net you posted earlier in the thread.

As for the build quality of the hammock, it looks OK to me and when I'm finished with it, we'll know one way or another
B

Wow so confused. Im new to hammocks and im in the market right now to buy one byt after reading this im not sure anymore.

I didnt realise a hammock needed a ridgeline? Is this completely separate to the tarps ridgeline? If so how does it work

I've got big budget issues and its called a wife that doesn't like me spending money on bushcraft so I fould a "net" hammock for $6 and a parachute hammock for $10 from ebay but it sounds like I should spend more money to stop it ripping in half haha.

Any ideas/wisdom is appreciated since I have no idea

blacklion said:
Wow so confused. Im new to hammocks and im in the market right now to buy one byt after reading this im not sure anymore.

I didnt realise a hammock needed a ridgeline? Is this completely separate to the tarps ridgeline? If so how does it work

I've got big budget issues and its called a wife that doesn't like me spending money on bushcraft so I fould a "net" hammock for $6 and a parachute hammock for $10 from ebay but it sounds like I should spend more money to stop it ripping in half haha.

Any ideas/wisdom is appreciated since I have no idea
Click to expand...

Hammocks don't need a ridgeline but they can help set your sag the same each time you hang, can be somewhere to hang stuff or help keep a net up, definitely not needed though.

blacklion said:
Any ideas/wisdom is appreciated since I have no idea
Click to expand...

This is old vid i did years ago, it covers some of my early gear you may find interesting.

I'd did, we have moved since, funny looking back on places you once lived
Last edited: Sep 2, 2014
B

Cheers lepmeister ill check it out tonight
B

Thanks SimonM its all still new to me.
B

Really, again... Its set to public. Try again for me mate..
B