Field Notes: A light brown to olive coloured prawn with a large wide tail with distinctive plating similar to a lobster which tapers of toward the head. It has two claws attached to a large flattened head. The rear tail is made up of several small fins with yellow tips.

Uses: Killer prawns are edible although usually not fished for. They are good eating and can be cooked on coals in their shell or boiled. 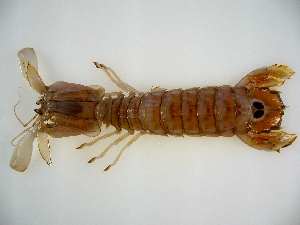 They live in burrows like this one and can be pulled out with a stick with a hook on but there is
a knack to it. (Underwater World, Mooloolaba)

i wonder if these can be found in Sydney. would be much fun to go lookin for then. also whilst on the subject of fishing would a snake fang make a good hook?

There are mantis shrimp in Sydney waters, not sure of species or habitat.
I wouldn't try to use snake fangs as fishing hooks, but have a look at this thread on Blade Forums for some ideas
http://www.bladeforums.com/forums/showthread.php/756177-survival-fish-hooks
You must log in or register to reply here.
Share:
Facebook Twitter Reddit Pinterest Tumblr WhatsApp Email Link
Menu
Log in
Register
Top